3-0 to emerge as the grand champion of the League of Legends Sea Tour!

Liyab, the professional esports team of Globe in partnership with Mineski, routed Steelwolves GAIA, 3-0 to emerge as the grand champion of the League of Legends Southeast Asian Tour Invitational at Conquerors Manila 2019 held last Sunday at the World Trade Center.

Liyab, the professional esports team of Globe in partnership with Mineski, routed Steelwolves GAIA, 3-0 to emerge as the grand champion of the League of Legends Southeast Asian Tour Invitational at Conquerors Manila 2019 held last Sunday at the World Trade Center recently.
The team, composed of Lee “Ggamza” Joo Young, Edrian Frances “Doedoii” Brancia, Eric “Exosen” Gubatan, Bae “Gari” Yong-Jun and James “Hamez” Santos, bucked a slow start in the first game but came up big once they got things going to rout their opponents in the all-Filipino best of five finals before an enthusiastic crowd.
Aside from bragging rights and a trophy, Liyab took home a whopping P1M cash prize out of the total P2.7M cash pot, making it the biggest win so far for the Liyab LoL squad.
“We are so proud of them and very happy about the win. The team performed extremely well but more importantly, their impressive victory is a testament to how successful our program is with Liyab Esports. By balancing both the mental and physical preparations of our athletes, we can expect to see them rise above extreme pressure and compete well before their fans and supporters,” Gerry Soler, Head of Globe Games and Esports, said.
Prior to reaching the finals, Liyab LoL likewise had an impressive run in the elimination rounds, taking down Thailand’s Sea Serpents, with a quick 2-0 victory.
Powered by Globe, Conquerors Manila’s League of Legends Invitational Championships drew the top four teams in South East Asia. It was also the biggest LoL event in the region. Aside from elevating fan experience, Conquerors Manila also gave fans and supporters the chance to support Hineleban Foundation’s reforestation program in Bukidnon. The two-day event raised 910 trees enough to reforest at least one hectare of denuded land.
With its championship run, Liyab LoL is setting its sights on competing in more international competitions next year. These include the upcoming Pacific Championship Series, where they’ll face the best teams from League of Legends teams in Southeast Asia, as well as Taiwan and Macau. 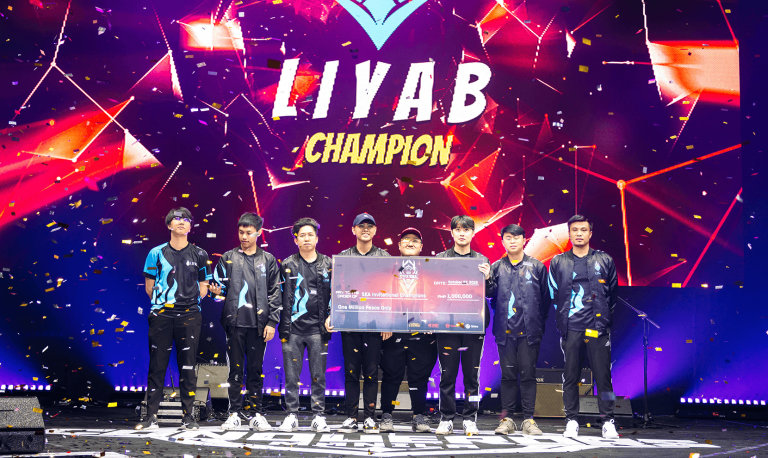 Members of Team Liyab, the professional esports team of Globe in partnership with Mineski, accept the check worth P1-M for winning the League of Legends (LoL) SEA Tour Invitational Championship at the recently concluded Globe Conquerors Manila 2019 at World Trade Center in Pasay City.